Alibaba operates three of the largest digital platforms in China: e-commerce, cloud and payments. We estimate Alibaba Group (BABA:NYSE 9988:HKG) to be valued at up to US$900 billion based on a Sum Of The Parts (SOTP) valuation of its various operating segments: 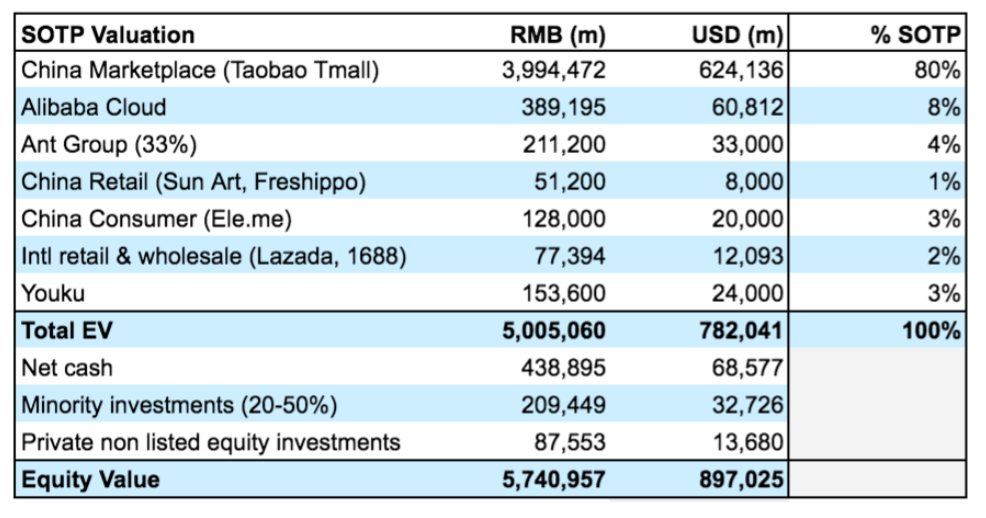 This article analyses Alibaba’s two main operating segments that represent up to 88% of the group valuation (Taobao/ Tmall and Alibaba Cloud) and shows how you can formulate your own valuation and thesis. To learn the fundamentals of valuing any technology company refer to this article with a case study of how to value YouTube. 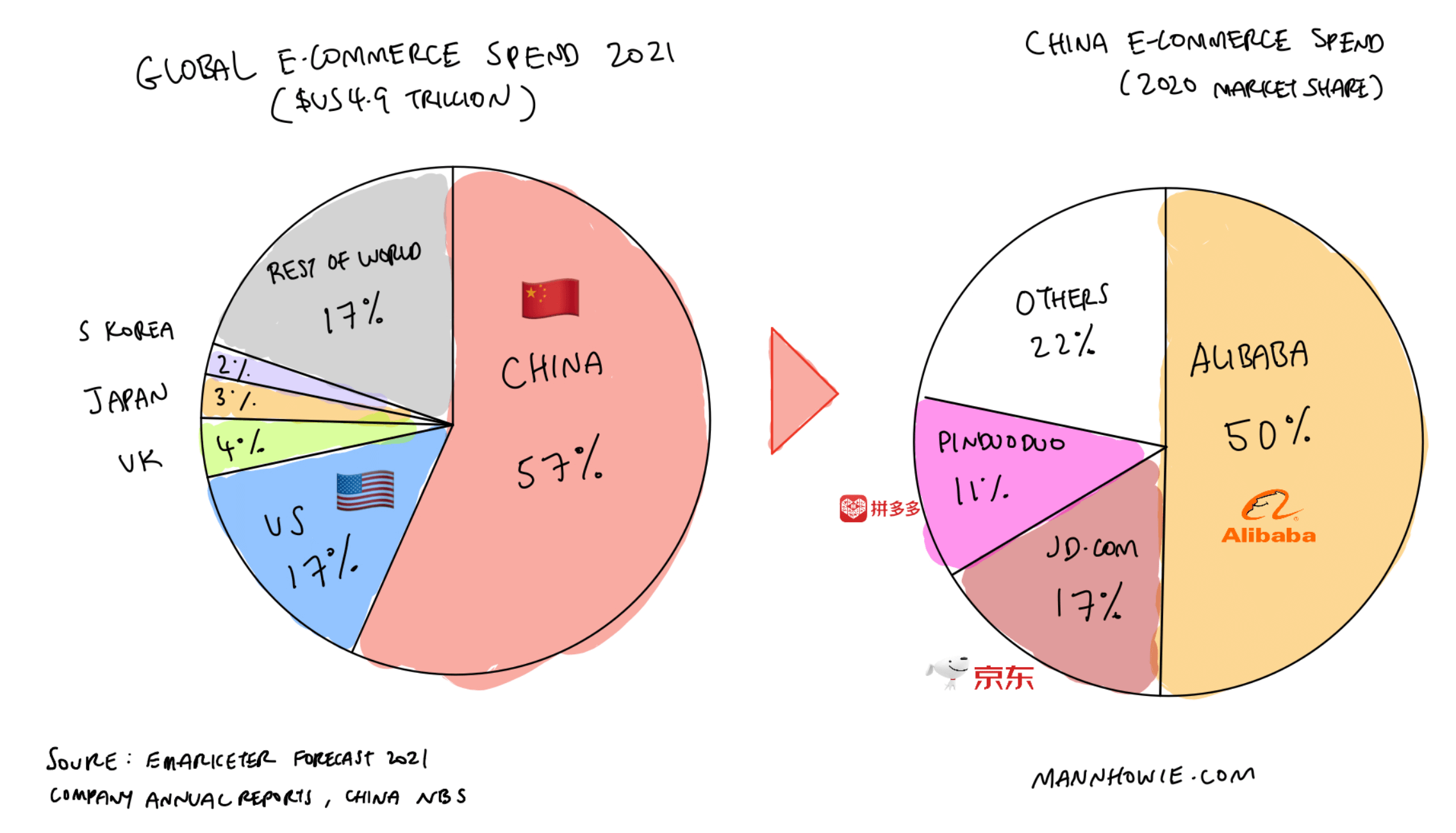 China is likely to continue to dominate global online spending the next decade and beyond. Relative to the United States, China has 5x the online shopping population and is still only at 20% of US GDP and Income per capita. Across e-commerce there are two economies: China and the Rest of the World.

Within China, e-commerce is dominated by three players: Alibaba, JD.com and Pinduoduo. Alibaba’s annual Gross Merchandise Value (GMV) across its two platforms Taobao and Tmall in China alone is more than all annual online spend across the US, UK and Japan combined.

Alibaba’s largest and most profitable segment is its e-commerce marketplace platform in China known as Taobao and Tmall. We value this segment at RMB 4 trillion (US$ 624 billion) representing 80% of the entire valuation of Alibaba.

What is Taobao and Tmall?

With over 811 million active annual customers, Taobao is effectively the internet platform for e-commerce in China. Nearly all merchants and businesses that sell to Chinese consumers have an online store on Taobao.

There are two main platforms within the one Taobao mobile and web app: Taobao and Tmall with a total GMV split 50/50: 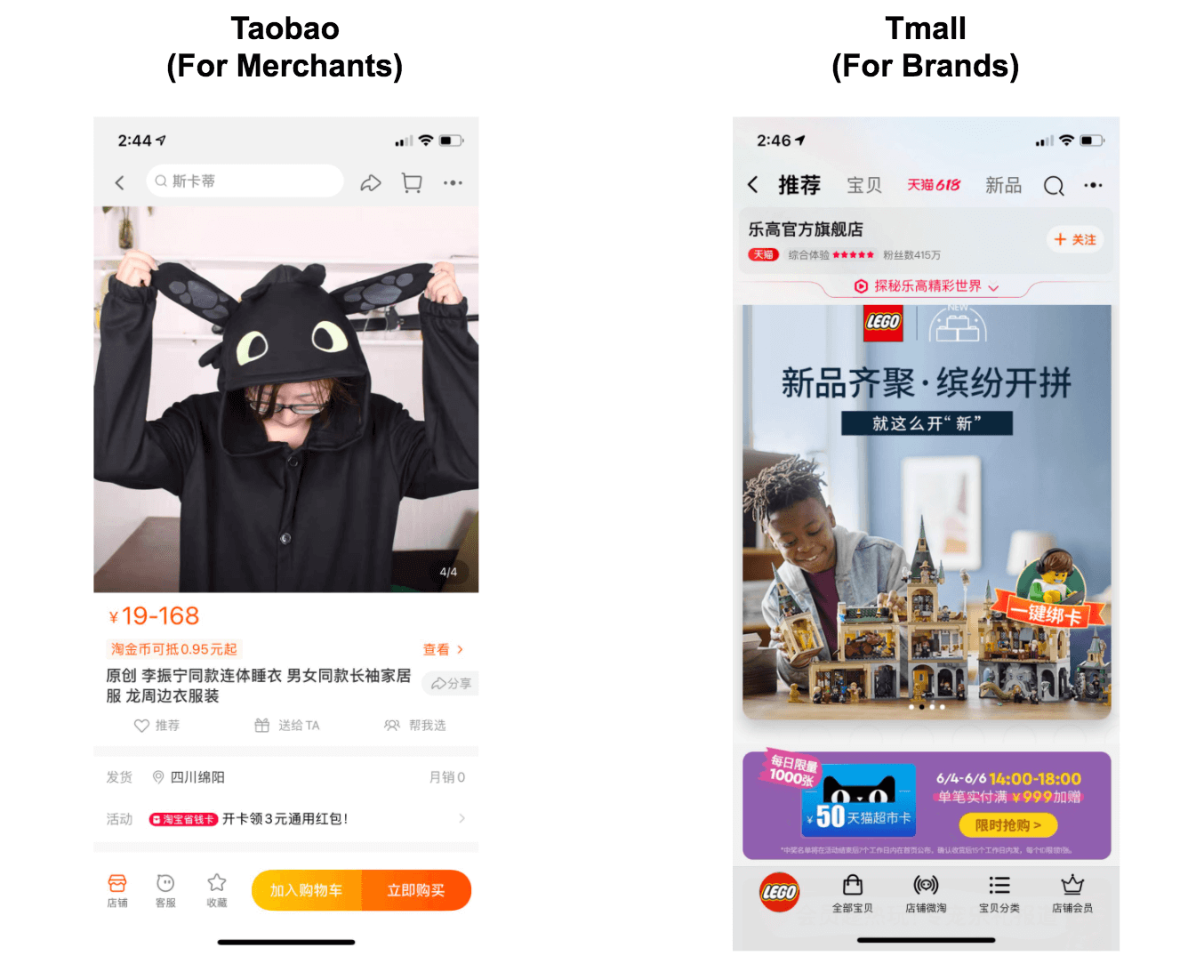 Alibaba’s e-commerce business model is marketplace-based and facilitates transactions between buyers and sellers. Unlike Amazon and JD.com, Alibaba does not purchase and resell inventory nor does it own or operate its own fulfilment and distribution centres. It is the sellers responsibility for organising delivery to the buyer either direct or via Alibaba’s network of 3rd party logistics providers (via its global Cainiao logistics business).

How does Taobao Tmall generate revenue?

What is the growth thesis for Alibaba China E-Commerce?

The e-commerce market in China is now highly mature with over 50% of retail sales done online and Alibaba maintaining the dominant share. Having been the dominant e-commerce platform in China for the last decade we expect overall growth to slow.

Having said that, we still expect Alibaba to remain the dominant e-commerce platform in China and expect Alibaba’s annual GMV to grow another 50% over the next decade and ad monetization to increase from ~3% to +3.5%. 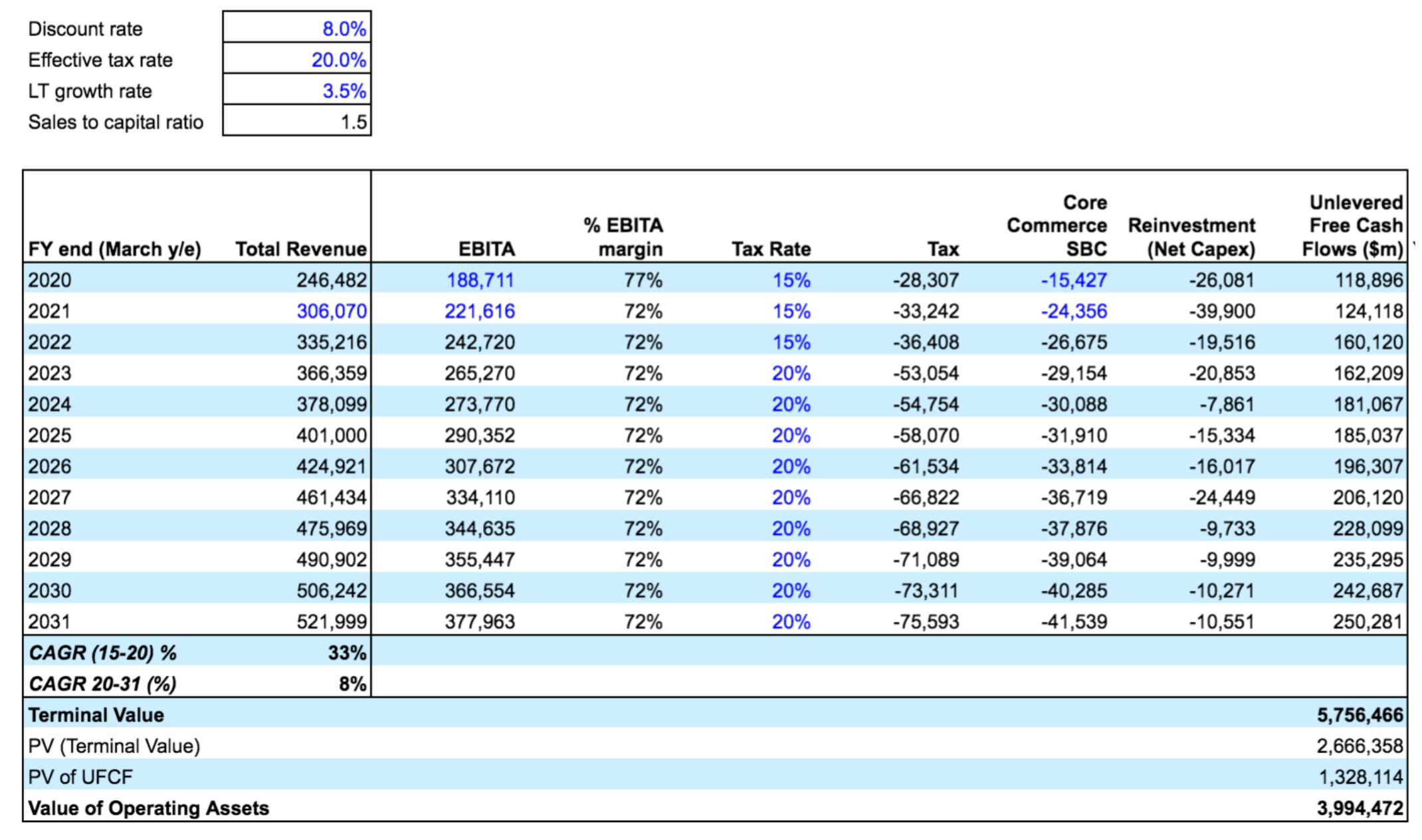 Alibaba’s second most valuable operating segment is its cloud computing business Alibaba Cloud. We conservatively value this segment at RMB 390 billion (~US$60 billion) on the basis it continues to dominate the Chinese market but will face stiff competition globally particularly given political concerns in western economies around hosting of data by Chinese domiciled companies.

What is Alibaba Cloud?

Alibaba Cloud is the 4th largest cloud computing provider globally and the largest in the Asia Pacific with +40% share in China. It sells cloud-based compute and storage infrastructure services to businesses looking to host their applications and data primarily in China (although it operates globally).

Alibaba Cloud is similar to Amazon Web Services offering similar competing offers often at even lower prices when hosted in China vs AWS. It has a clear advantage over the other hyperscale cloud providers within China given its significant existing presence in the Chinese market and wider local market support.

Our RMB 390 billion (US$ 60 billion) DCF valuation for Alibaba Cloud is based on the following key assumptions: