The IKEA effect describes how people come to overvalue things in which they have successfully put effort into. This cognitive bias can pose risks to organisations in the form of sunk cost effects and “not invented here” syndrome. 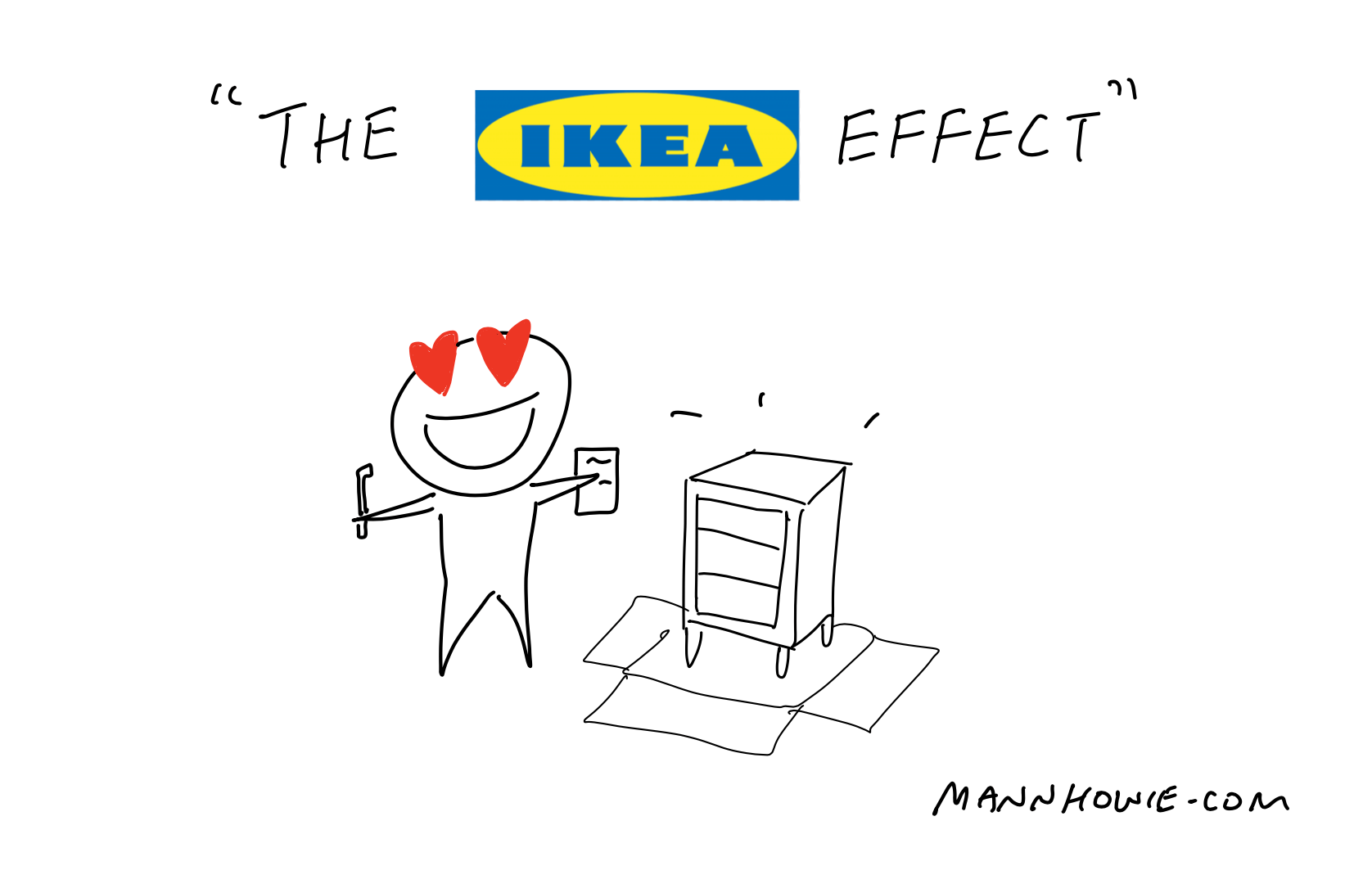 This article explains when and why the IKEA effect emerges and introduces four ways you can defend against it.

1. What is the IKEA effect?

The IKEA effect is a finding that people tend to ascribe a higher valuation towards self-assembled products compared to objectively similar products which they did not assemble.

A study by Norton, Mochon and Ariely (2011 paper) found participants who self-assembled an IKEA storage box (Builders) valued the purchase price 63% higher than those who inspected the same pre-assembled box (Non-Builders). Similarly, the Builders also rated liking the box 55% more than Non-Builders.

In another experiment one group of participants were asked to create origami (Builders) and another asked to inspect their creation (Non-Builders). Similar to the first experiment, the Builders valued their creation 360% higher than the Non-Builders who ascribed close to no value to the origami (“nearly worthless crumpled paper”).

2. Pitfalls of the IKEA effect

The IKEA effect explains broadly why people may come to fall in love with their own ideas. With the effect strongest when people expend a greater amount of their own effort and perceive their effort as successful.

The IKEA effect has negative implications for organisations more broadly as a contributor to two key organisational pitfalls:

Here are some examples of how the pitfalls could occur:

Here are four ways you can avoid and defend against the IKEA effect.

In the IKEA effect study, participants were found to be unaware of their unconscious bias. 92% of the participants when asked said they would pay more for pre-assembled products compared to self-assembly. This was in direct contradiction of their actions in the study.

Acknowledging you are prone to the cognitive bias of the IKEA effect can be the most effective way to mitigate against it. When completing an effort on a solution or idea, admit to yourself that you probably love it more than other solutions, because you worked on it.

The IKEA effect study found that the effect was strongest only when the effort was successful. Failure to complete tasks had corresponding negative psychological consequences. People ruminate more on tasks they failed to complete than on those they successfully completed, leading to negative affect and regret.

Spike rough prototypes and MVPs to test ideas early. Embrace sharing ideas that you are embarrassed with so it will be easier to cull.

Framing your solutions and efforts towards the customer struggle can help mitigate your bias against any one solution.

Talking to customers is the best way to achieve this. Learn how to conduct user interviews to surface customer's struggling moments and understand why they don't love their current solutions (example user interview questions).

Growth experiments can help mitigate against confirmation bias by setting the discipline to state the problem statement, hypothesis and success criteria upfront before expending effort on a solution. Learn how to run your own growth experiment in this tutorial (How to run a growth experiment).

The Build, Measure and Learn framework popularised by Eric Ries in his book The Lean Startup explains how to apply a learning and feedback loop to measure the success of products and solutions.