Cognitive biases can negatively impact your ability to think critically and make informed decisions. Once you are aware of them, it will help you identify and navigate them.

Here is an explanation of the 4 main types of cognitive bias, some examples and how you can navigate them:

Focus on the traits of the successful whilst ignoring the failures. 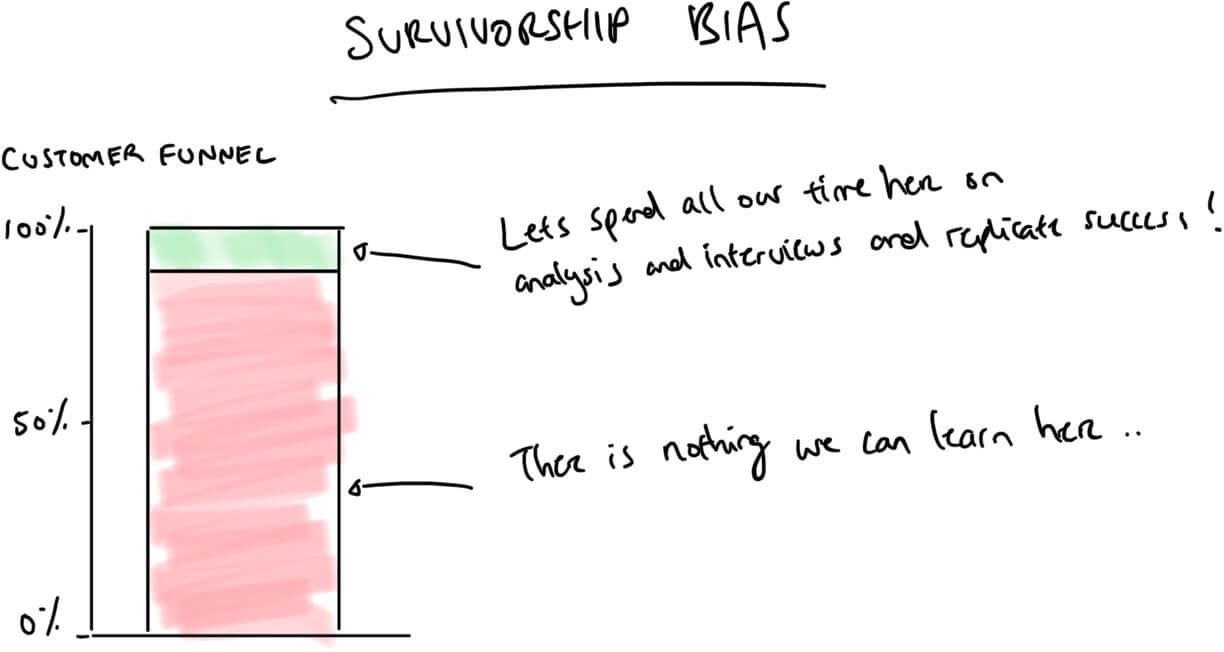 This involves limiting our analysis to instances that have passed a success hurdle and not analysing those that didn’t pass the hurdle. This commonly occurs when we adopt key learnings from successful case studies yet remain blind to the unsuccessful instances who may have also followed the same learnings.

The famous WWII case study involves mathematician Abraham Wald who was tasked with identifying where to place more armour on fighter planes. The officers data of bullet holes in returning planes supported placing more amour on the fuselage vs the engine. However, Wald’s insight was to ask where the bullet holes weren’t - i.e. the engine. The surviving planes had fewer hits to the engine because those that were hit didn’t return.

A modern example would be to look at a customer acquisition funnel with a 10% activation rate. Common analysis would be to take key learnings from the behaviour and personas of this group to further lift activation. However, the greater insight would be to analyse the other 90% and ask why aren’t they activating? The latter is more challenging and often involves less access to data, but the payoff is greater.

Ask questions about what other data and groups are missing. Identify the success hurdle and ask why others have not passed it.

Focus on data to promote our existing beliefs. 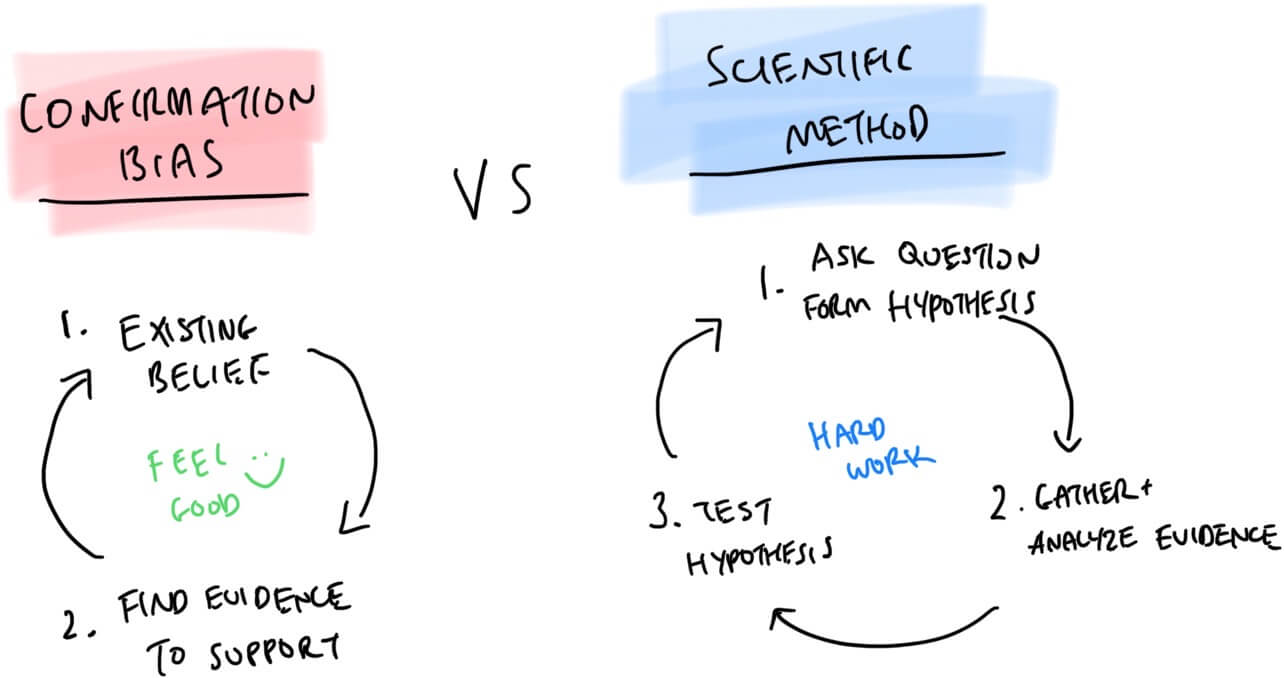 This involves seeking out information that validates our existing views and prior commitments. We also discount other information that may invalidate our views. Confirming evidence makes us feel good and people do what makes them feel good. The counter approach is the scientific method, which attempts to ask questions first before gathering evidence to either support or reject a hypothesis. The former is easier and faster, the latter is harder and time consuming.

The CEO has a new idea to launch a new product and instructs a team to conduct market research and competitor analysis on the feasibility of this product. The market research team is limited in scope and risks being urged to validate the success of the CEO’s new product idea. A better task for the team would be to investigate what the best product would be to solve a particular problem.

Try and identify if there is a pre-existing belief (yours or otherwise). Reflect on information you have rejected. Ask others with a different viewpoint.

Solving a problem based on the context it is presented. 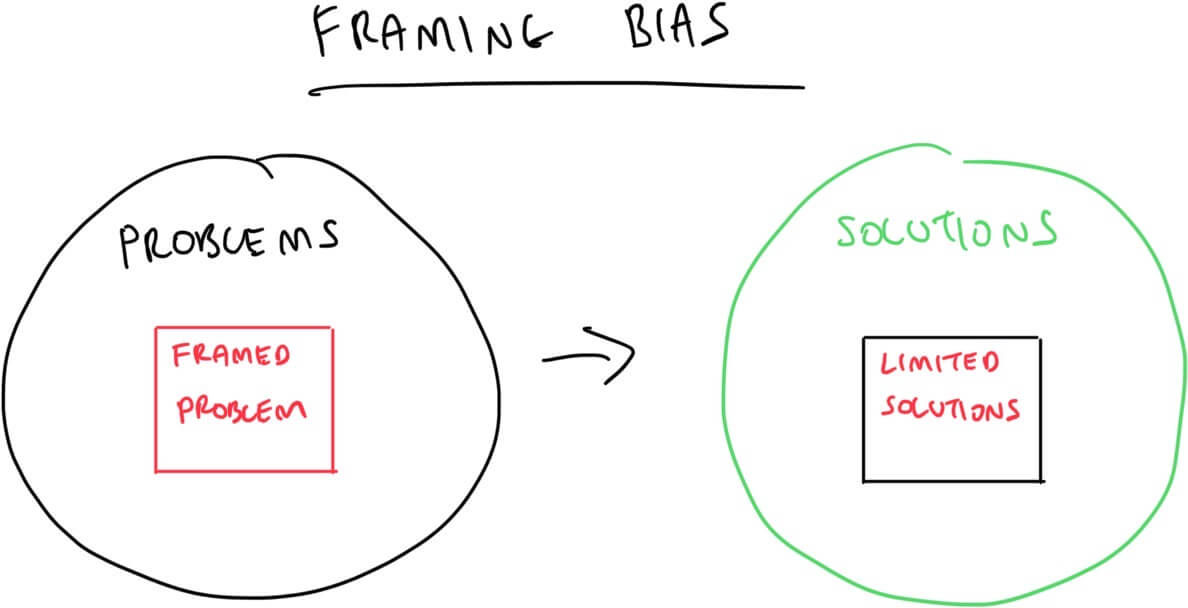 The specific context a problem is framed/ presented can influence the options and choices available.

The problem of low company profitability can be either framed as a need to cut costs or to increase revenue. The way the problem is framed will influence the options available (i.e. fire and restructure or enter new markets).

Ask what is the ultimate problem we are trying to solve. For example, ask what the outcome would be if we solved this problem. See if there are other solutions to achieving the same outcome.

The desire for group harmony leads to poor decision making. 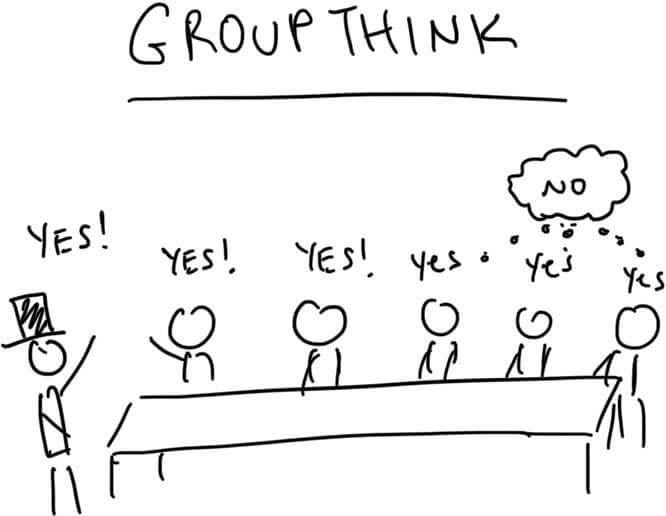 People tend to avoid conflict, particularly in the presence of a majority and people of authority. People assume others have made informed decisions and fear the risk of looking un-knowledgable in front of others.

The term groupthink arose from the case study of the failed US Cuba Bay of Pigs invasion. In 1961, the CIA presented to President Kennedy a Cuba invasion plan formulated under the previous administration. Kennedy accepted it and early objections were dismissed and eventually no objections or alternatives arose. Kennedy learnt from this and a year later during the Cuban Missile Crisis intentionally absented himself from initial meetings to encourage free discussion. Two teams were created to evaluate the options before presenting to Kennedy.